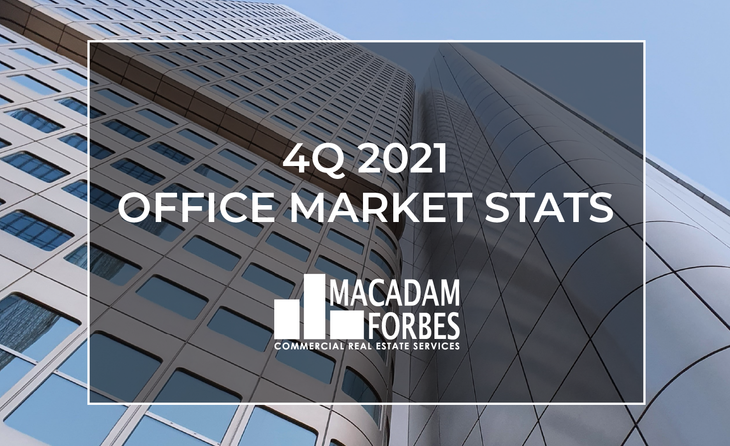 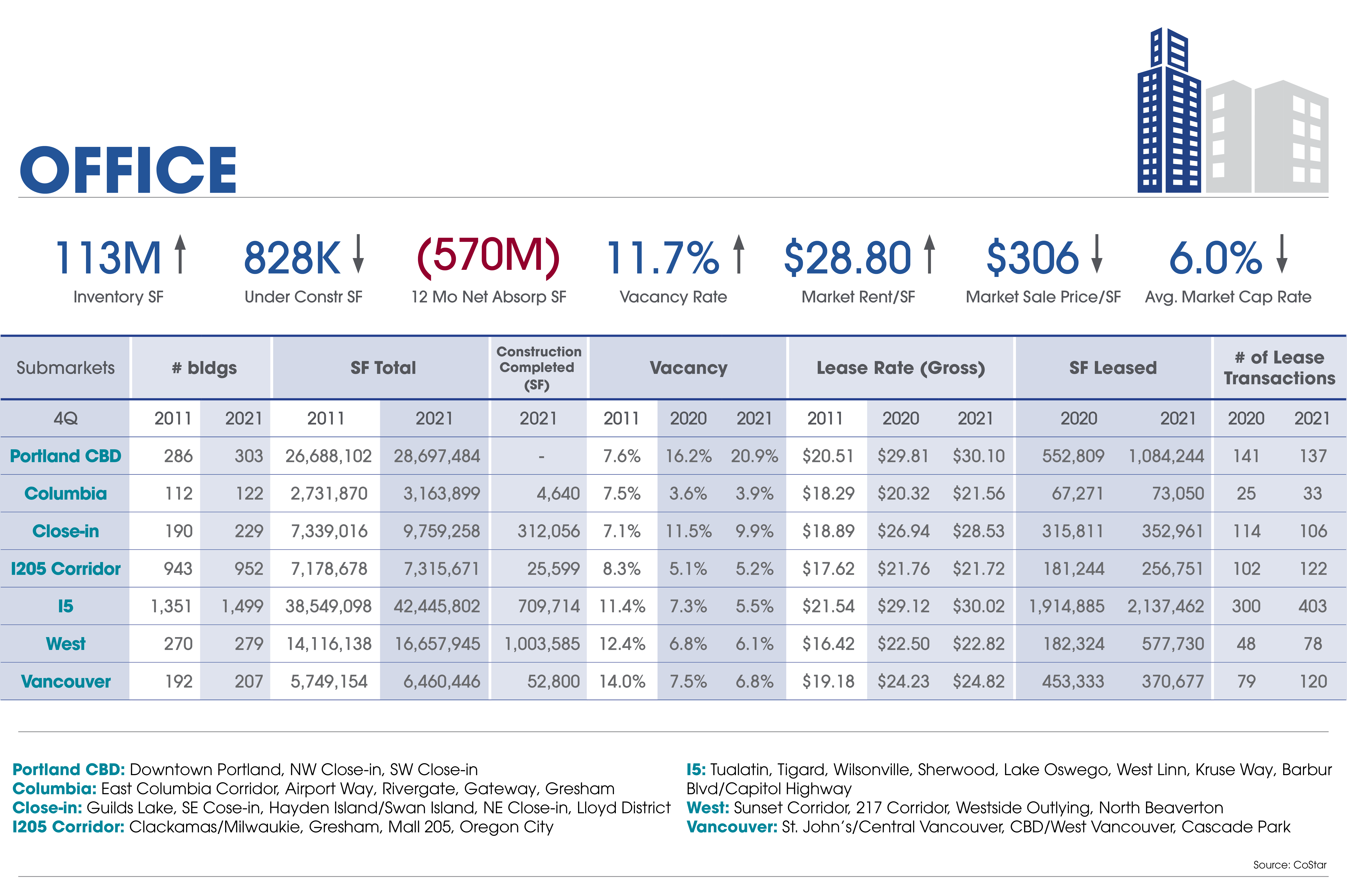 The Center on Budget and Policy Priorities has created a chart book which tracks the Post-Great Recession Economy. The Business Cycle Dating Committee of the National Bureau of Economic Research (NBER) declared on June 8, 2020 that “the economic expansion following the trough in April 2009 peaked in February 2020. On July 19, 2021, it announced that the trough of the ensuing recession was in April 2020. While the recession was very deep, it was the shortest on record at just two months.” Portland’s commercial real estate market recovery from the Great Recession truly took hold in 2011, steadily growing until this most recent turn of the economy. Looking back at 2011, we see how far we have come, and what is predicted to be the “new normal” for Portland’s commercial real estate market.

The coronavirus pandemic interrupted a years-long run of growth for the Portland office sector. Office demand sharply contracted as a large segment of the workforce shifted to a remote work approach. Negative net absorption has caused office vacancies to creep upward, now sitting at roughly 11.7%, compared with the national index of 12.3%. Such vacancy escalation led to the market's first rent losses since the last recession. However, year-over-year rent growth has returned, and is posting gains of 2.7%, while national office rent gains are about 0.3%.

Over the past decade, Portland's structurally low vacancy rates, dynamic economy, and strong cumulative rent growth have heightened the metro's profile as an investment market. More recent slowing sales volume reflected uncertainty in the office market surrounding the spread of the coronavirus and the negative impact from national news coverage of civil unrest. Growth is likely to be somewhat restrained in the near term as buyers and lenders seek to understand the emerging dynamics in a newly mobile office workforce.

Portland's office pipeline consists of 830,000 SF currently under construction, set to expand existing inventory by 0.7%. Over the past decade, Portland's office inventory has grown by 7.6%, versus nationally-indexed growth of 5.4% over the same period. One of the largest speculative projects currently under construction is the 269,908 SF 503 on Tenth within the SE Close-In submarket. Delivery is anticipated for January 2023. The ten-story project will feature lab space with BSL2 classification, basement level parking for 130 vehicles with a lift parking system, a common conference and event center with views of Mt. Hood, and common area showers and changing rooms. Building ownership is marketing to attract BioTech companies.

Perhaps the most anticipated development in the market, the 35-story Block 216 broke ground in July 2019 and is set to reshape the Portland skyline. Owned by BPM Real Estate Group, its office portion will comprise 169,000 SF of five-star speculative space. Asking rates are $38/SF to $42/SF NNN. In addition to five floors of office space, the tower also contains the first Ritz-Carlton in the Pacific Northwest, along with 15 floors of luxury residential condos and 4.5 floors of parking. Proposed for the ongoing Vancouver Waterfront development, Lincoln Property Company and Bridge Investment Group will jointly develop a 366,000-SF office building to suit the needs of tech company ZoomInfo. The go-to-market software, data, and intelligence company signed a lease for the entirety of the building in 21Q3.

Not all office development, however, comes in the form of ground up projects. Given Portland's historically strong fundamentals and startup-oriented workforce, creative office space is popular among both tenants and developers, with projects most often located in and around the CBD, Lloyd District, and SE Close-In submarkets. Though some creative office projects are in fact built from the ground up, like Field Office, more are renovations of existing properties, like warehouses. These types of ventures make sense in inner urban areas, given available land constraints and space limitations.

The 69,000-SF Premier Gear & Machine Works Building is one of the largest examples of this trend. Formerly owned and occupied by a manufacturer, the NW Close-In property was acquired by Sturgeon Development Partners as a redevelopment project in 2017. Converted to creative office and delivered in August 2020, the Premier Gear & Machine Works Building remains available for lease as of late-2021.

On the east side of the Willamette River in SE Close-In, The Clay Blocks is set to deliver over 11,000 SF of creative office space in late 2021 or early 2022. The former garage will cater to smaller tenants, with an open work floor design and 25 parking space in an adjacent lot.
(Source: CoStar) 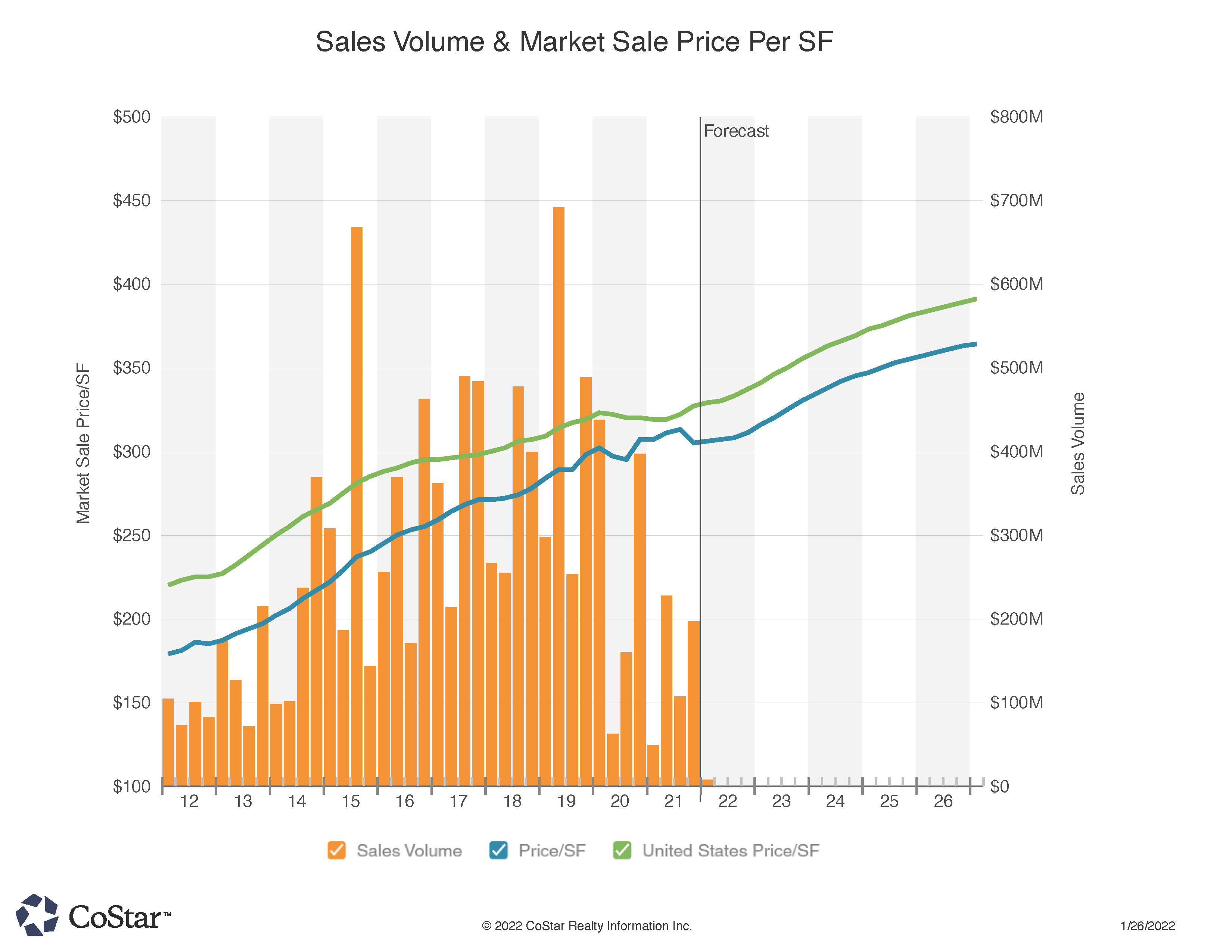 Average pricing has held steady in the limited trading taking place, with office assets trading for around $240/SF, based on recorded sales with confirmed pricing. Average cap rates inched up in recent quarters to sit around 5.8%. Not surprisingly, sales volume is consistently highest in the CBD, Portland's premier office hub. Nonetheless, several of the larger transactions in 2021 were reflective of suburban assets.
(Source: CoStar)